Spelt bread is a healthy lower-gluten, lower-calorie alternative to whole wheat with a rich, nutty flavor and all the health benefits of whole grains. 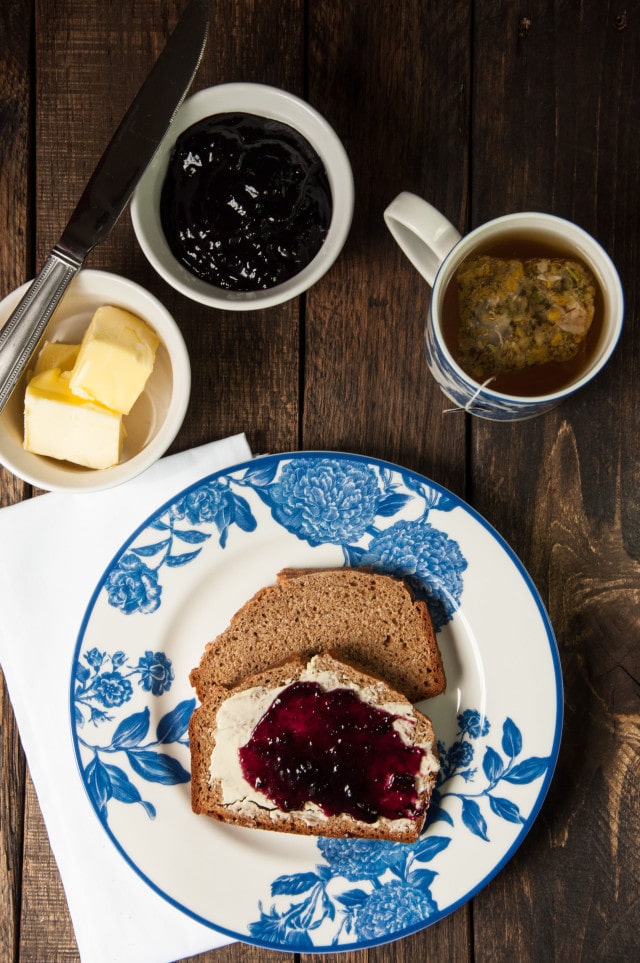 I like baking, but admit, I’m not really very skilled in the art of breads, pastries, and pretty much anything that requires precise measurements and ratios. Whenever I get a wild idea about some kind of baked good, I have to go into it knowing that its going to take oodles of tries to get it right.  I’m especially stumped when it comes to yeast breads. All the rising, kneading, and waiting just doesn’t seem to be my thing.

A recent skim through ingredient lists on store-bought bread got me especially motivated though, so I set out to make a loaf of hearty, healthy bread that can be mixed and ready for the oven in under 10 minutes. Spelt flour

is very similar to whole wheat but has a nutty, almost sweet flavor and less gluten, which makes for a dense, tasty loaf. 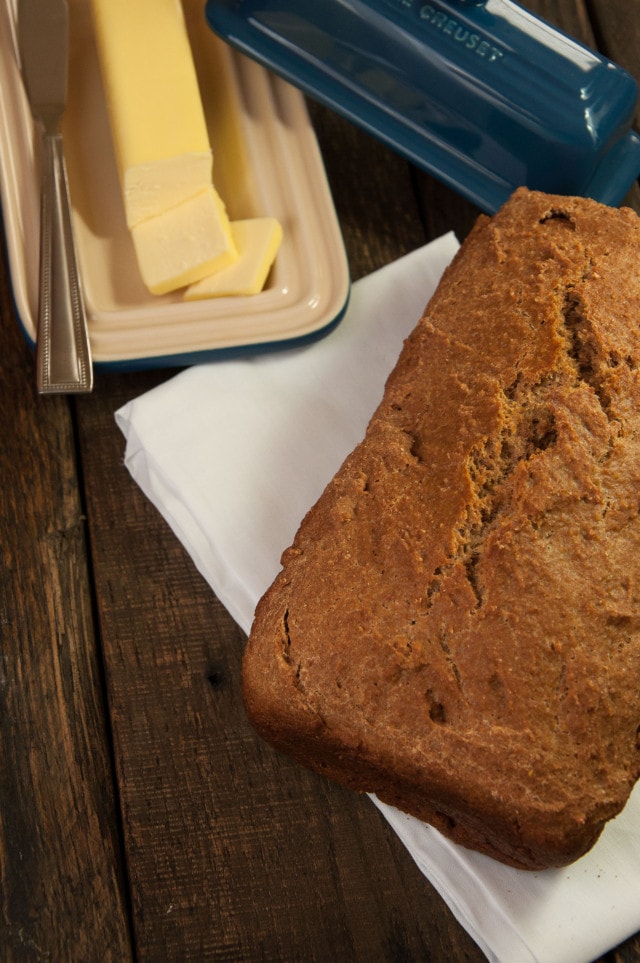 This recipe was inspired by this tried and true spelt bread recipe, which I followed (almost) to a T the first time I made it, and then adjusted in later versions based on our preferences. The end result is the ideal sandwich bread, complete with perfectly textured crust and a wholesome, wheat-like taste. 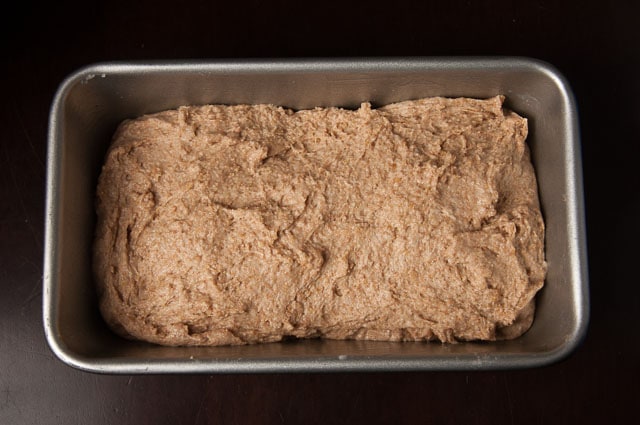 The trick to the crust is the dual loaf pan technique. Baking with another loaf pan on top forms the firm outer crust that makes this bread truly delectable. 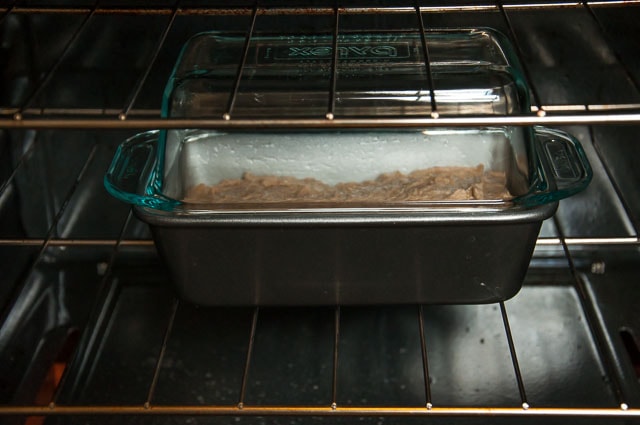 I’m always trying to cook healthy food, but with the ever evolving nature of how “healthy” is defined, its hard to keep up with what’s supposed to be good for you and what isn’t. I know that gluten is become less and less popular these days and with so much conflicting research from each side of the argument, its hard to know what to believe. I don’t eat a whole lot of breads or packaged foods so gluten isn’t a major staple in my diet by any means, but I don’t intentionally avoid it altogether.

I think regardless of how the verdict on the gluten war plays out, the big lesson for me on this has been in how I approach the latest health food crazes. So much of it comes does to common sense in my opinion. Of course processed cookies, crackers, and granola bars aren’t healthy. Will eating a cookie once in a while have a major impact on your health? Probably not. If these foods make up the bulk of your diet though, you may want to invest in bigger pants. And better health insurance.

But what about the not so common sense stuff that seems to have snuck its way into our lives? Like the dangers of BPA, sucralose, and GMO’s? These things aren’t as transparent and the only way the public has become conscious is through the dedication of activist groups and staying abreast of recent research. In the early stages, these revelations always sound kind of hokey and I normally doubt the validity of the claims. I mean, how is it that something as prevalent as canned food can really be the culprit behind such a harmful toxin leaching into our bodies? How is it that no one (in America at least) noticed the profoundly negative affect this has on our health until now?

With how complex our food system is at this point, its hard to stay on top of the most current research and easy to become overwhelmed with all the conflicting information. For me, making healthy changes in my diet has come from consciously deciding to make it a priority to stay on top of new research in the food arena and make changes gradually. A perfect diet is NOT what I’m gong for (since a life without Ben and Jerry’s just isn’t worth living), but eating clean foods for *most* meals is an achievable goal that leaves room for splurging on favorites here and there.

I am not ready to weed out gluten entirely and don’t know if I ever will, but am definitely keeping a watchful eye on research being done to see where this one goes. In the mean time, limiting gluten intake and deliberately deciding not to make it a huge part of my diet certainly can’t hurt. So, this spelt bread is just that. Not gluten free, but lower in gluten, one baby step at a time on this journey. 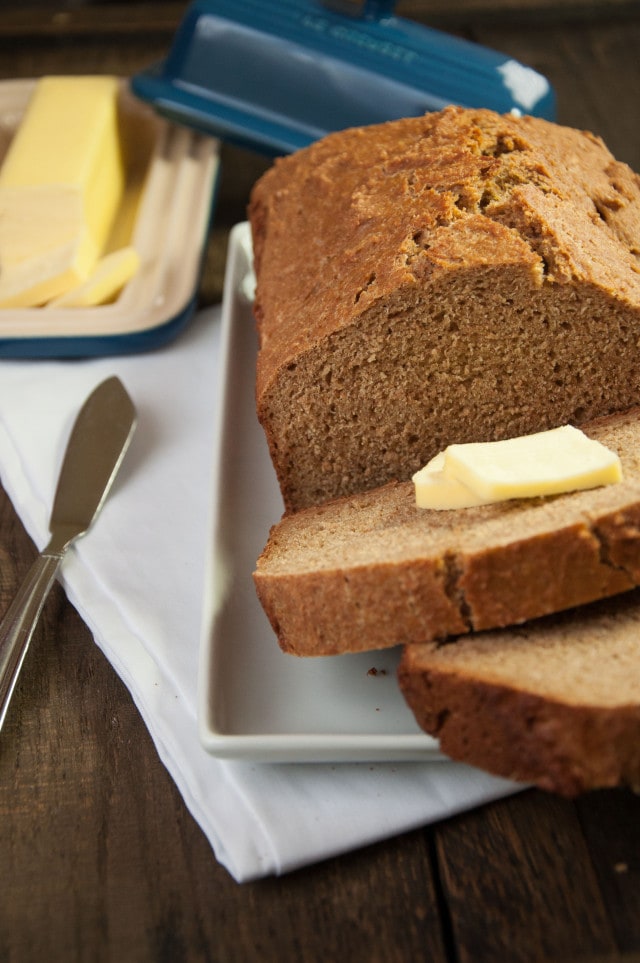 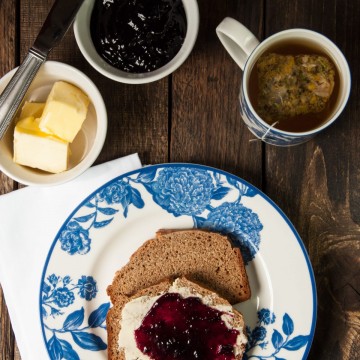