This easy recipe for shredded taco meat can be used for crockpot chicken tacos, Mexican salads, enchiladas, quesadillas, or anything else you think up!

Fact: chicken tacos taste better shredded. Its just the way it is. Like sky being blue and grass green. Shredding means that every little strand soaks up as much flavor as physically possible. And, what could be better than getting all that flavor for under five minutes of prep work? Not much I tell you, not much.

Crockpot chicken tacos just might be the the most flavor you'll get for such little effort.

I know I didn't get this to you in time for Cinco de Mayo, but you don't need a random holiday as an excuse to eat tacos. In fact, no excuses are EVER needed for tacos. They're pretty much always a good idea.

I make this recipe about once a month or every other month and normally do a double batch. This way I can separate and freeze it into individual bags that I can bust out every time I get a quesadilla craving or want a taco salad stat.

That's the thing with this crockpot chicken tacos recipe. You don't actually have to even use it for tacos. There are endless possibilities.

We made a pretty epic impromptu nacho platter a few weeks ago that I would highly recommend. Not healthy in the least bit, but delicious nonetheless.

I've also used this shredded chicken taco meat in place of my veggie taco blend in lettuce wraps like these ones. Not only does this convert this crockpot chicken tacos recipe into a low carb option but the crunch of the lettuce adds great texture.

If you're watching your animal fats, you can swap the chicken thighs for breast meat. I prefer thighs though since they have a ton more flavor. They're perfect for crockpots too because they don't dry out the way breast meat does. And no one likes a dry breast.

Breasts aside - I've got another thing to rave about when it comes to crockpot chicken tacos... they can be made in 2 hours! For realsies!

I was in a hurry the other day and totally forgot to start the slow cooker before heading out to run a few errands. We were having people over for tacos so this was a total rookie mistake. Its hard to do taco night without the tacos.

I rushed home and frantically cut the fat off the chicken and sprinkled spices into my preheating slow cooker.

After cranking her up to high, I crossed my fingers and somewhat assumed we'd end up eating takeout because it wouldn't be ready in time. Well, all the worrying was for not because it turned out crazy good in no time at all. Taco Tuesday to the rescue! 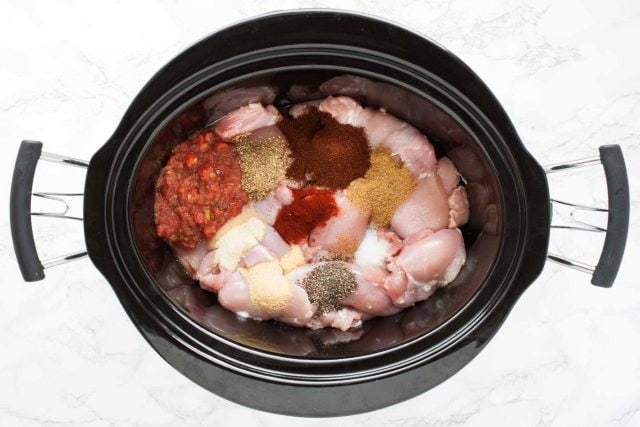 Here's a close up of all that spicy goodness. That's the flavor just waiting to happen. Yum.

If you aren't a spice lover, you can tone it down by using a mild salsa and chili powder. Its up to you. Normally when I eat chicken tacos like this, I like a hint of heat but don't want it to be overpowering so I go with a medium salsa. Then again, that's just me. The final (and arguably most fun) step is shredding. You've got to get in there with a couple of forks and just go to town. There's no real technique here other than shredding until you have nice thin strands.

Before you start shredding, it will look like there is an insane amount of liquid but don't drain it! The shredded chicken will soak that back up. That's what makes it super moist and juicy. 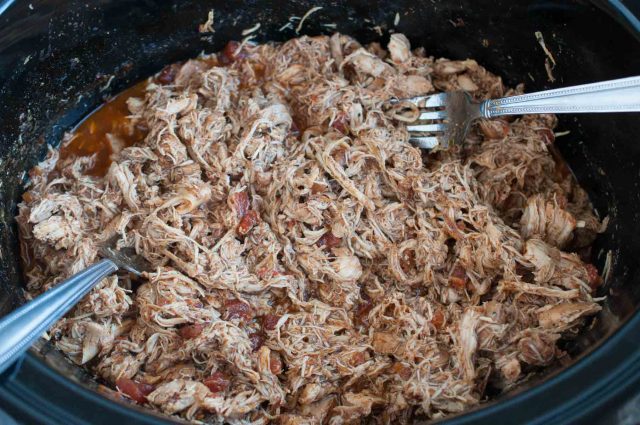 As an aside - can someone come up with a synonym for moist already that doesn't make people shudder? Please and thank you.

This recipes makes about four cups of shredded taco meat. It can be frozen in freezer safe ziplocks for later use. Actual cooking time may vary depending on the temperature of your crock pot.

We use cookies to ensure that we give you the best experience on our website. If you continue to use this site we will assume that you are happy with it.OkNoPrivacy policy